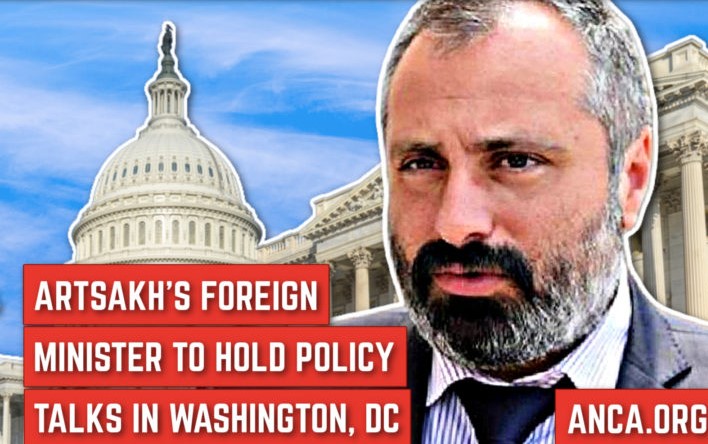 Minister Babayan will offer the keynote speech at an ANCA event dedicated to Artsakh security and liberty held at the historic Woodrow Wilson House, the museum honoring the U.S. president who championed efforts to secure a U.S. mandate to support the Armenian Republic in 1918. He will also be the featured speaker at the “Capitol Hill Salute to Artsakh’s Independence,” organized in cooperation with the Congressional Armenian Caucus, which will be held on Monday, September 19th. Due to Congressional regulations related to COVID-19, supporters of Artsakh freedom must request to attend the Capitol Hill event by registering at anca.org/rsvp.

“We welcome Minister Babayan’s consultations across Washington with U.S. policymakers and foreign policy stakeholders – as well as his remarks on Capitol Hill, at the Wilson House, and at our policy conference – as a meaningful contribution to constructive U.S. engagement on Artsakh Republic status and security issues,” said ANCA Executive Director Aram Hamparian. “Artsakh’s voice – in Washington and on the world stage – represents the unbending resolve, the abiding democratic aspirations, of the Armenian nation to endure, to survive, and thrive on the very frontier of world freedom against the forces of darkness and dictatorship.”

Following his Washington, DC visit, Babayan will be traveling to California for a series of events and meetings with Armenian American community leaders and elected officials.

Born in Artsakh’s capital, Stepanakert, David Babayan has served as Foreign Minister of the Republic of Artsakh since January, 2021. Prior to that, he has held positions in government ministries of the Artsakh Republic including the Ministry of Foreign Affairs of the (2000 – 2001); the Presidential Planning Group (2001 – 2015); Assistant to the President (2005 – 2007); Head of the Central Information Department of the Office President (2007 – 2021). He founded and currently leads the “Artsakh Conservative Party.”

Babayan has received a degree in economics from the Yerevan Institute of National Economy, and Master’s Degrees from the American University of Armenia, and the Central European University (Budapest). He holds a doctorate in historical science from the Armenian National Academy of Sciences Institute of Oriental Studies. He has authored more than 300 articles and monographs of scientific research in the areas of Azerbaijan – Artsakh (Karabakh) negotiations, Caucasus geopolitics, great power competition, and Chinese geopolitics.