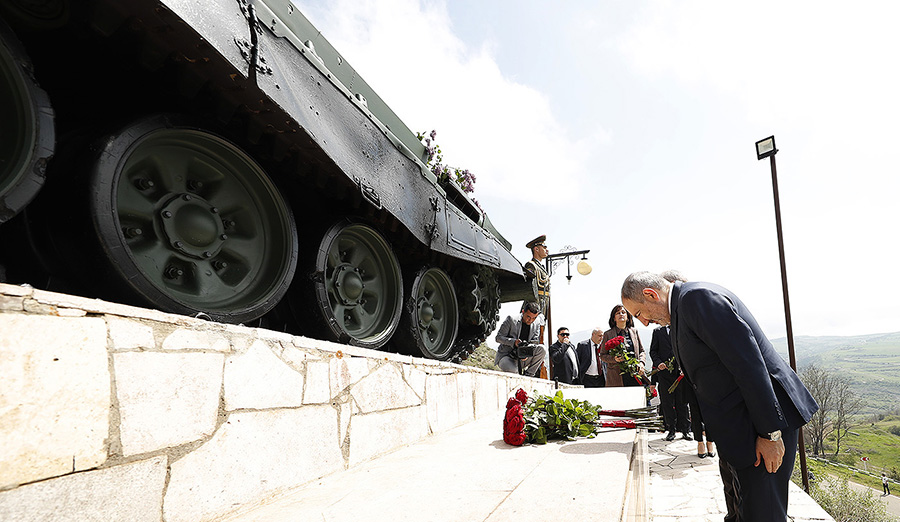 Armradio – The Armenian nation played a significant role in bringing about that victory and, as a result, in liberating Europe from the scourge of fascism, Prime Minister Nikol Pashinyan said in a congratulatory message on the 75th Anniversary of Victory in World War II, Shushi Liberation Day and the day of foundation of the Artsakh Defense Army.

“This very day 75 years ago, our people joined other peoples of the former Soviet Union to celebrate the victory over fascism, one of the greatest evils in human history. The victory was achieved through enormous human suffering, sacrifice, unprecedented courage and perseverance,” the Prime Minister said,

He said the Armenian nation played a significant role in bringing about that victory and, as a result, in liberating Europe from the scourge of fascism. More than half a million Armenians were involved in the war as part of the Soviet army. Thousands of Armenians fought in the squads of resistance movements in European countries.

“The Armenian people sacrificed about 300,000 lives on the altar of victory. For a nation that had survived the Genocide just a quarter of a century ago, it was an incredibly large number comparable to the human losses suffered by the great powers. While no hostilities had taken place on our soil, the population of Soviet Armenia fell by more than 13 percent at the end of the war,” Pashinyan added.

Today, as we bow to the memory of our martyrs, we are proud of our ancestors’ heroism, he said.

“During the war, 107 Armenians were awarded the title of Hero of the Soviet Union, the highest award given for exceptional heroism. The significant contribution made to mankind’s victory by the Armenians living in Armenia and the Diaspora and especially the valuable material contribution of the Armenian Apostolic Church deserve special praise,” the Prime Minister noted.

“We have fully paid off our debt for all the wars in the 20th century. And now we are well aware of the cost of peace more than anyone else. Our identity is best expressed through creative work we do in peacetime. At the same time, knowing the price of peace, we are ready to defend it at all costs and to stand up again for our freedom and dignity, where necessary,” Nikol Pashinyan said.

“Whether a coincidence, or perhaps a deed of Providence, on this very day we are celebrating the liberation of Shushi and the establishment of the Artsakh Defense Army, exceptional events that crowned Armenia’s modern history,” he added.

“The liberation of Shushi ushered in the liberation of Artsakh. Followed up with a brilliant victory, it became the pledge for our people’s security and peace. We are firmly determined to ensure the security of the people of the Artsakh Republic: their right to self-determination is not subject to bargaining. Both are absolute values ​​for us,” Pashinyan stated.

He called to commemorate and pay tribute to our heroes who died for the liberation of Shushi and Artsakh, who stood just as strong as their ancestors did about half a century ago in World War II.

He called to commemorate “those brave guys who fell in the Four-Day April War – our modern-day heroes who sacrificed their lives to prove our people’s unbreakable will for freedom.”

“Glory to all our heroes who fought for the freedom of the Armenian people! Long live Armenia and Artsakh!” the Prime Minister concluded.