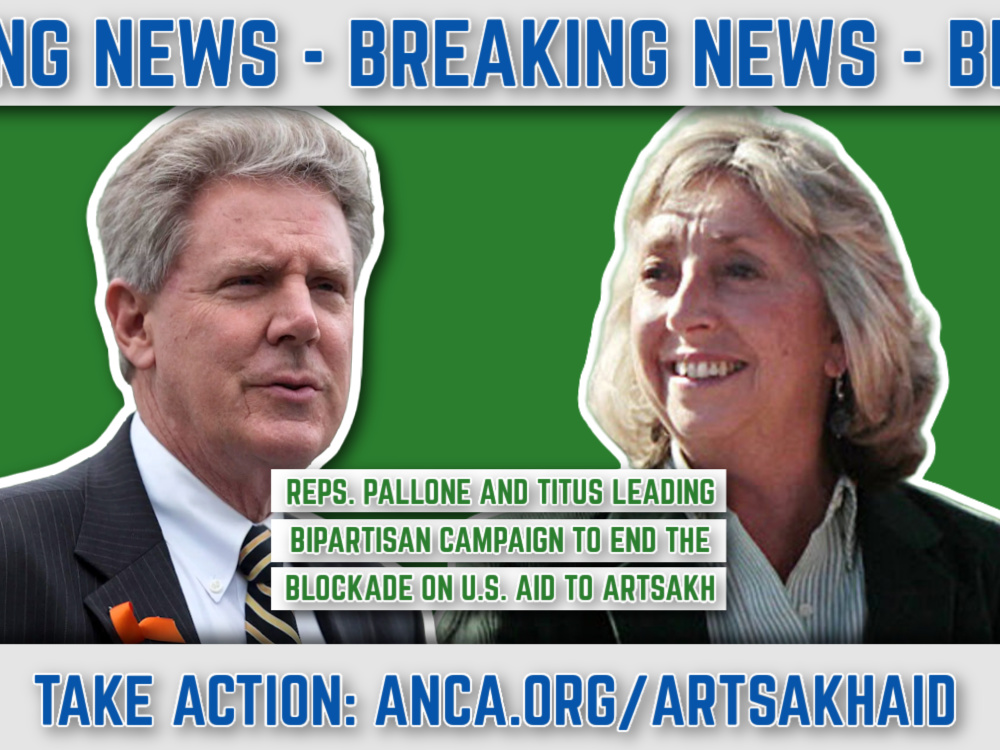 “Let’s be clear,” said ANCA Government Affairs Director Tereza Yerimyan. “The decision to cut-off humanitarian aid programs in Artsakh was taken at the highest levels of our government – consistent with a deeply flawed set of U.S. policies that, on the ground, have the practical effect of aiding and abetting Azerbaijan’s drive to ethnically-cleanse the remaining Armenians in Artsakh by denying at-risk families food, fuel, water and other life-sustaining resources.”

In a “Dear Colleague” letter to U.S. Representatives, Reps. Pallone and Titus stress that “to date, USAID has only committed $5 million to the assistance of displaced people of Artsakh who are currently in Armenia. This amount is not sufficient to address this humanitarian crisis, and we are also concerned that the individuals who remain in Artsakh have not received any of this critical aid.”  The letter calls on Secretary of State Antony Blinken and USAID Administrator Samantha Power to:

1) Increase direct aid to the people of Artsakh

3) Conduct a needs assessment on the humanitarian crisis in Artsakh

Earlier this week, ANCA Chairman Raffi Hamparian, in letters sent to Congressional leadership and rank and file U.S. Senate and House members, called for Congressional inquiries into the Biden administration’s effective blockade on humanitarian aid to Armenian families of Artsakh.  “America must not be complicit in the ethnic-cleansing of Artsakh by Azerbaijan,” stressed Hamparian.

The full text of the Pallone-Titus Congressional letter is available below.

We are deeply concerned by the lack of meaningful humanitarian aid to the vulnerable Armenian population in Artsakh (Nagorno-Karabakh) and urge you to take immediate steps dedicating significant resources to these individuals.

The people of Artsakh continue to face severe hardships caused both by the deadly 44-day war that Azerbaijani forces provoked in 2020 and the ongoing aggressions committed against innocent civilians. The U.S. Agency for International Development (USAID) has acknowledged that over 90,000 refugees displaced to Armenia, the majority of whom are women, children, and elderly, are suffering through an acute humanitarian crisis.

The $5,000,000 in Fiscal Year 2021 funding that USAID has committed, and the assistance allocated through the United Nations’ Armenia Interagency Response Plan (IA-RP) have been wholly insufficient to address this crisis. Many families have bravely returned to their homes in Artsakh despite the ongoing threat of violence from Azerbaijani troops and the food, shelter, and energy insecurities they face. We are also extremely concerned that the individuals who remain in Artsakh have not received any of the previously allocated U.S. assistance.

Our country has historically promoted peace in Artsakh through U.S. government-funded landmine and unexploded ordnance clearance efforts. We have also supported rebuilding through millions of dollars of direct aid for humanitarian assistance initiatives like maternal health care and clean drinking water projects. The need for this assistance has only grown due to Azerbaijan’s indiscriminate bombing campaigns in 2020 and the ongoing provocations by their troops which further endanger food, water, energy, and other critical resources for these communities. It is especially urgent because of Azerbaijan current attempts to close the Lachin corridor, which is a vital route used for transportation and communications between Artsakh and Armenia.

We strongly urge the Department of State and USAID to significantly increase funding that will directly assist the Armenian population in Nagorno-Karabakh, including assistance for housing, food security, water and sanitation, health care, rehabilitation, and demining and UXO clearance services they need to safely rebuild their lives, homes, and communities. We also urge you to take every action possible to protect the historic and cultural Armenian sites in territory held by Azerbaijan, which many reports indicate are currently under threat.

We request an update on the specific actions the Biden Administration has taken to help at-risk Armenians living in Nagorno-Karabakh and any planned actions moving forward, including information on programs, partners, budgets, and deliverables. This update should differentiate between which resources were allocated to the Republic of Armenia to aid displaced people and the assistance allocated to those still living in Nagorno-Karabakh

Additionally, the most recent publicly available report from USAID on Nagorno-Karabakh from February 2021 is outdated and no longer provides the data that we need to make sound policy decisions. We strongly urge you to conduct an updated needs assessment on the humanitarian crisis and share it with interested stakeholders as soon as possible.