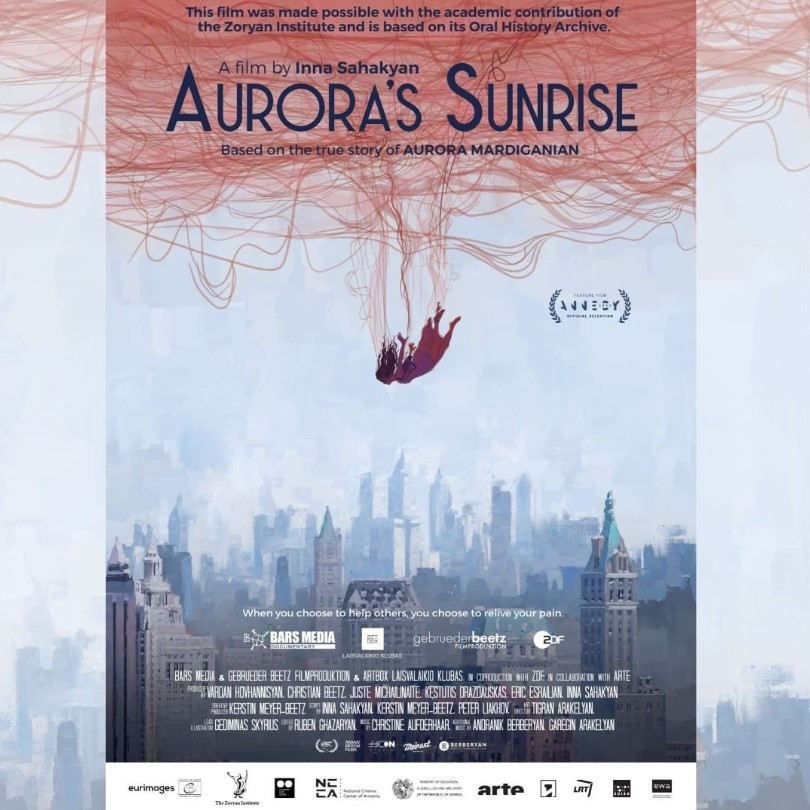 Aurora’s Sunrise, a historical animated documentary film about the life of Aurora Mardiganian, will premiere at the Annecy International Animated Film Festival in France this week, the Zoryan Institute said in a statement.

“At only 14 years old, in 1915, Aurora faced the horrors of the Armenian Genocide. Within a year, witnessing the deaths of everyone in her family, Aurora had lost everything, and was sold into a Turkish harem. But with extraordinary courage and luck, she escaped to America, where her story became a sensation.

The Zoryan Institute’s objective with this film is to bring to life the ZI’s Oral History Testimonies onto the big screen, through animated documentary films, to relay the stories of the Genocide survivors to the younger generations, especially of girls and to empower them, and  to represent their communities in the face of great adversity and violence.

In 2015, during the year of the 100th anniversary of the Armenian Genocide, the Zoryan Institute, signed a partnership agreement with Bars Media of Armenia to produce the animated documentary based on the testimony of A. Mardiganian. Aurora’s Sunrise was made possible with the academic contribution of the Zoryan Institute Armenia, based on its oral history archives (filmed by the Zoryan Institute on January 29, 1984).

The film is directed by Inna Sahakyan. It is produced by Bars Media, led by Vardan Hovhannisyan, Gebrueder Beetz Filmproduktion&ArtboxLaisvalaikioKlubas, with the financial partnership of Eurimages, the Zoryan Institute Armenia & the National Cinema Center of Armenia, and with the contributions of the Lithuanian Film Center, ZDF/ARTE, Public TV Armenia, and LRT.

The Zoryan Institute is thrilled that 40 years after the launch of the Armenian Genocide Oral History Project, which collected testimonies of survivors of the 1915 Genocide across 4 continents, the great-grandchildren of those who experienced the genocide are experiencing life before, during, and after the genocide through a film that seamlessly blends a mix of footage from the Zoryan Institute’s original live interview with Aurora and the brilliant animation of Bars Media and their German and Lithuanian co-producers, along with scenes from the 1919 silent film “Auction of Souls” (film starring Aurora Mardiganian prepared by Near East Relief).

The world premiere of Aurora’s Sunrise, is taking place at the prestigious Annecy International Animated Film Festival in France this week. Annecy is a week-long global festival that brings together the biggest names in animation to celebrate creative and diverse animation styles and techniques.

In addition to initial cost of the Oral History testimonies, Aurora’s Sunrise film had a budget of over USD $1,000,000.00, and is only the beginning of these invaluable stories of Armenian Genocide survivors”, the statement says.