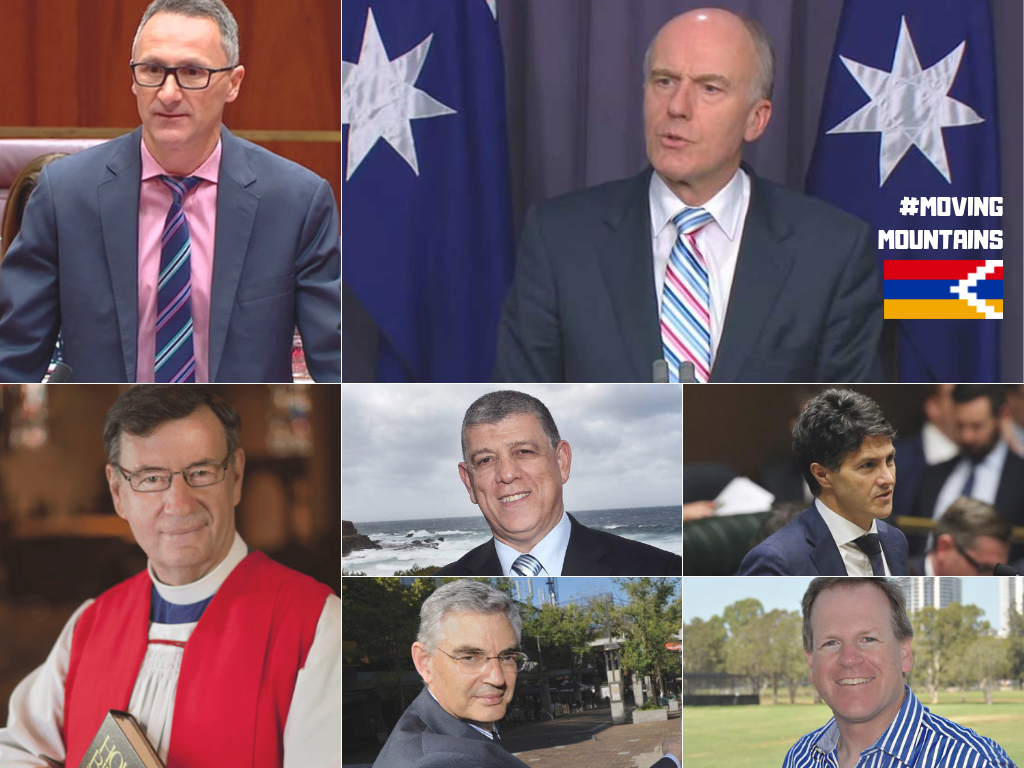 Senator the Hon. Eric Abetz – the Chair of the Australian Senate’s Foreign Affairs, Defence and Trade Committee, Senator Richard Di Natale – the Leader of the Australian Greens, and Glenn Davies – the Anglican Archbishop of Sydney, lead a group of seven high-profile additions to the growing distinguished membership of the Australian Friends of Artsakh.

The Armenian National Committee of Australia (ANC-AU) report that Senators Abetz and Di Natale, as well as Archbishop Davies have joined as new members of the group, together with the Hon. John Ajaka – the President of New South Wales Legislative Council, the Hon. Victor Dominello – the New South Wales Customer Service Minister, Councillor Stuart Coppock – City of Willoughby and Councillor Trenton Brown – City of Ryde.

The Australian Friends of Artsakh was launched last month by the ANC-AU with an announcement dubbed #MOVINGMOUNTAINS during the visit by a high-profile delegation from the Republic of Artsakh, led by Foreign Minister Masis Mayilyan.

Among the inaugural 40 signatories were Federal Ministers and Parliamentarians, a State Premier and fellow State Parliamentarians, a Mayor and Councillors, academics, thought leaders, and heads of several religious and community institutions – all pledging solidarity to the rights to self-determination of the Armenians of the Republic of Artsakh.

The new additions mean the group now has 47 prominent Australians as signatories.

“The petro-dictatorship of Azerbaijan, who denies the indigenous Armenians of Artsakh their basic human right to self-determination and independence on their ancestral lands, resorted to propaganda and bullying tactics to try and prevent our leaders from joining in solidarity with this issue,” added Kayserian, referring to official complaints from Baku to Canberra trying to bring Australian leaders into line with the Department of Foreign Affairs’ pro-Azerbaijani position on the Nagorno Karabakh conflict.

Kayserian said: “This high-profile expansion of the Australian Friends of Artsakh shows that the currency of truth and justice wins over the unwelcome interference by a foreign dictatorship into the internal affairs of Australia’s sovereign democracy.”