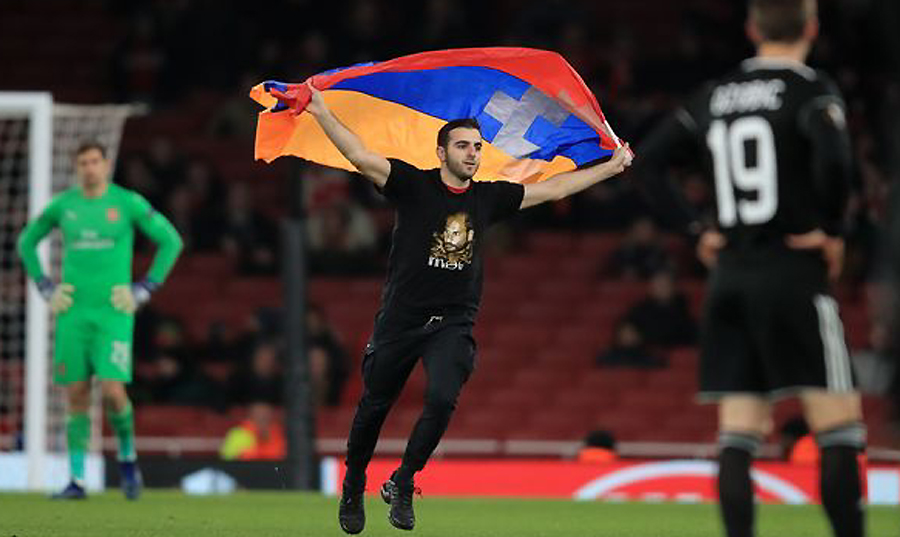 (Armradio) – A pitch invader interrupted Arsenal’s win over Qarabag late in the Europa League clash at the Emirates. Visiting players were furious to see the man waving the flag of the Republic of Artsakh.

Qarabag is an Azerbaijani football club playing in the Azerbaijan Premier League.

The fan wearing a T-shirt with Artsakh hero Monte Melkonyan’s picture also appeared to point to the Arsenal bench, where Armenia captain Henrikh Mkhitaryan was sitting. Security officials escorted the fan off the field.

Henrikh Mkhitaryan was left at home earlier this season when the Gunners played Qarabag in Azerbaijan due to tensions between his native Armenia and Azerbaijan.

When the draw for the Europa League was made, Arsenal said: “Safety and security of all our players and staff is always a top priority.”

Arsenal defeated Qarabag 1-0. Alexandre Lacazette scored the only goal of the match with a slick 16th-minute winner from Mesut Ozil’s pass.

Arsenal will discover their last-32 opponents in Monday’s draw.