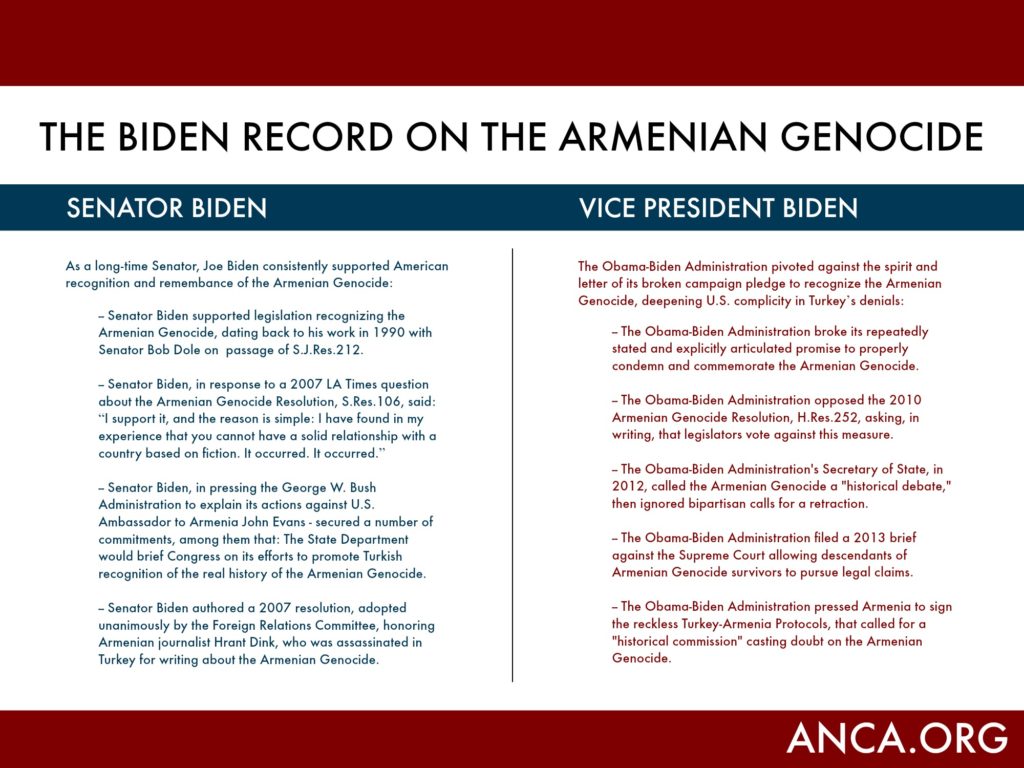 Thank you for your commitment and continued leadership to strengthen the U.S.-Armenian relationship. At a time when democratic principles are under attack around the world and decades of progress are at risk, bold leadership in defense of our shared values and our shared vision for the future is more important than ever.

The United States must reaffirm, once and for all, our record on the Armenian Genocide. We must never forget or remain silent about this horrific and systematic campaign of extermination that resulted in the deaths of 1.5 million Armenian men, women, and children and the mass deportation of 2 million Armenians from their homes. If we do not fully acknowledge, commemorate, and teach our children about genocide, the words “never again” lose their meaning. The facts must be as clear and as powerful for future generations as for those whose memories are seared by tragedy. Failing to remember or acknowledge the fact of a genocide only paves the way for future mass atrocities.

U.S.-Armenian relations have progressed because of your voice and your leadership, and I trust you will keep speaking out and fighting injustice wherever you find it.

The Biden record – as Senator and Vice President:

As a Senator, Joe Biden consistently supported issues of special concern to Americans of Armenian heritage:

Senator Biden’s record on the Armenian Genocide is provided below:

— Senator Biden, in response to a 2007 question from the Los Angeles Times editorial board about the Armenian Genocide Resolution (S.Res.106), said: “I support it, and the reason is simple: I have found in my experience that you cannot have a solid relationship with a country based on fiction. It occurred. It occurred.”

— Senator Biden – in connection with his leadership in pressing the George W. Bush Administration to explain its actions against U.S. Ambassador to Armenia, John Evans – secured a number of commitments from the Administration, among them that: 1) The State Department would brief Members of Congress on its efforts to promote Turkish recognition of the real history of the Armenian Genocide, and; 2) U.S. ambassadors to Yerevan and Ankara would exchange visits for the purpose of ending Turkey’s economic blockade of Armenia.

— Senator Biden authored a 2007 resolution, which was adopted unanimously in the Senate Foreign Relations Committee, to honor Armenian journalist Hrant Dink, who was assassinated in Turkey for writing about the Armenian Genocide.

The Obama-Biden Administration– over the course of two full terms in office – pivoted hard against the spirit and letter of its high-profile campaign pledge to recognize the Armenian Genocide, deepening official U.S. complicity in Turkey’s genocide denials and ongoing obstruction of justice for this crime.

The Obama-Biden Administration’s record on the Armenian Genocide if provided below:

— The Obama-Biden Administration, soon after taking office, broke its repeatedly stated and explicitly articulated promise to properly condemn and commemorate the Armenian Genocide.

— The Obama-Biden Administration formally opposed the 2010 Congressional resolution commemorating the Armenian Genocide, encouraging U.S. legislators – in writing – to block passage of this measure.

— The Obama-Biden Administration’s Secretary of State, in 2012, publicly dismissed the Armenian Genocide as a matter for “historical debate,” subsequently ignoring calls by 60 U.S. Representatives to renounce this act of outright genocide denial.

— The Obama-Biden Administration pressured Armenia to sign and support the 2009 Turkey-Armenia Protocols, a reckless and irresponsible accord that included provisions for creating a “historical commission” for the purpose – long advanced by Ankara – of calling into question the reality of the Armenian Genocide.