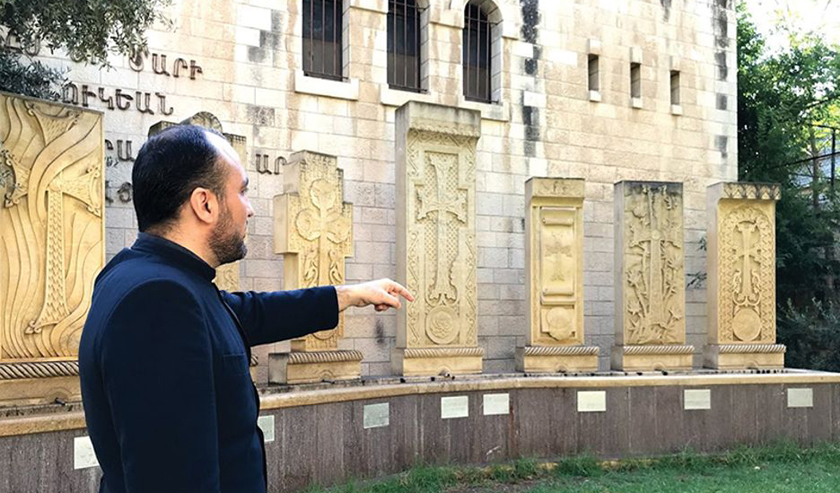 Jerusalem-based master tile artist Neshan Balian is preparing two exhibitions marking the centenary of Armenian ceramics in the city in September—one in Armenia and one at Jerusalem’s Rockefeller Archaeological Museum, The Art Newspaper reports.

His grandfather and namesake was one of three artisans invited in 1919 by Mark Sykes of the British Mandate government to repair the tiles of the Dome of the Rock Islamic shrine and to introduce a new art to Jerusalem, author Lauren Gelfond Feldinger reminds.

Balian has also been commissioned by the municipality to renovate the city’s calligraphy-tiled street signs in English, Arabic and Hebrew. Hand-painted tiles with motifs designed by his late mother, Marie Balian, can be seen on murals, doors and wares across Jerusalem.

But despite recognition, Balian, like his East Jerusalem neighbors, is still ethnically profiled and often subjected to full-body searches by Israeli airport security, he tells The Art Newspaper.

“I just turned 61, you get tired of pulling down your trousers to a 21-year-old [guard] who knows nothing of the sacrifices you have made to the Israeli art scene,” he says.

“More and more I feel like a second- and third-class citizen. There is a lot of emphasis on making Jerusalem as Jewish as possible. I’ll never be fully part of this city or country… I don’t think the elections make any difference,” he says.

Armenian church leaders say Christians in East Jerusalem “don’t enjoy equal rights”, although  the Armenian Orthodox Patriarchate has had a presence in Jerusalem since the fourth century.

Chancellor, Father Koryoun Baghdasaryan says “The most shameful thing is that a memorial to the Armenian genocide on church property remains closed to visitors because the municipality has delayed approving construction of the entrance.”

According to the source, the mayor’s office says a proper plan has not been submitted, but the Patriarchate assures all the necessary papers have been repeatedly filed over many years.

Israel has never officially recognized the genocide of Armenians by Ottoman Turks from 1915. Baghdasaryan says there is a “moral obligation” for Israel, being home to around 200,000 Holocaust survivors, to recognize the genocide.

Still, the Armenian Patriarchate continues to honor its own history. A fundraising campaign is under way to renovate its Armenian Museum before 2020 and to open a new gallery space in the Armenian Quarter, raising awareness about the community’s history in Jerusalem.