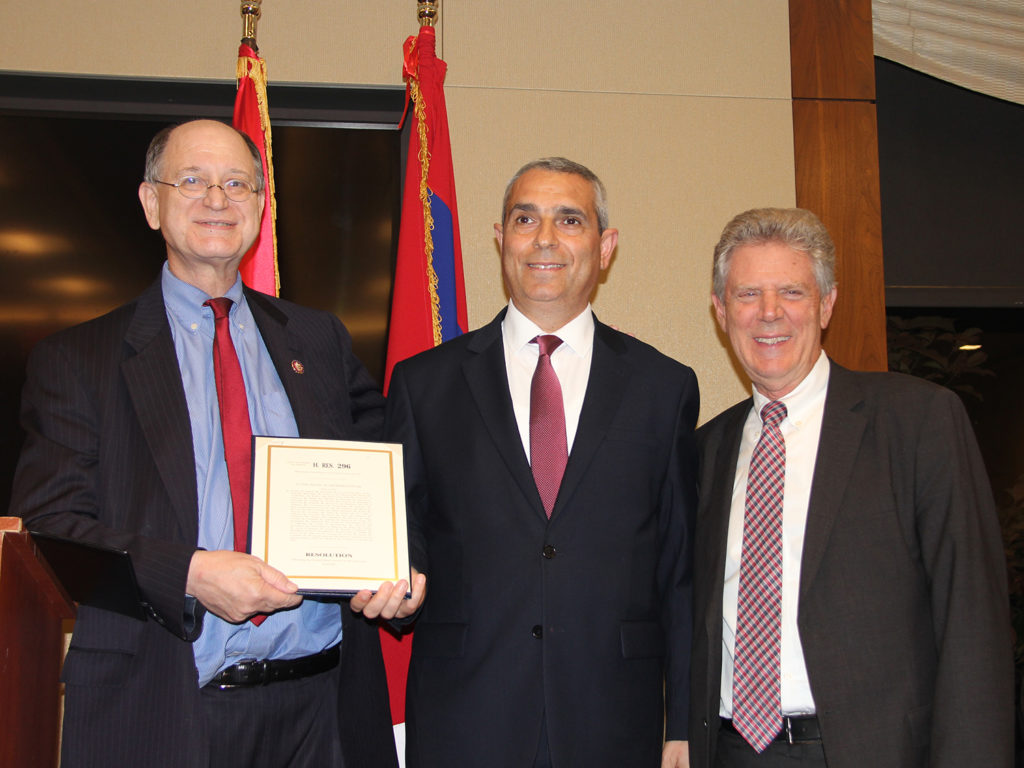 “As we stand here in the Halls of Congress, we are reminded that Artsakh is a very American story, the victory of free people over foreign rule,” said ANCA Government Affairs Director Tereza Yerimyan.  The ANCA was among the co-hosts of the annual Capitol Hill event.

Members of Congress – several of whom had recently traveled to the Republic of Artsakh – spoke emphatically about the Republic’s progress and shared their commitment to ensuring closer U.S.-Artsakh ties.  Each also shared their profound satisfaction over the House passage of Armenian Genocide legislation (H.Res.296) just a day earlier.

“Artsakh was just so beautiful with great food – in fact, I am enjoying Artsakh wine right now – it was so friendly, it reminded me of countryside in the south of France,” said Rep. Judy Chu (D-CA) said of her recent Artsakh visit.  “Being there made me even more determined to protect Artsakh,” noted Rep. Chu, who had spearheaded the Chu amendment to the FY20 National Defense Authorization Act  (NDAA) to put in place the Royce-Engel peace proposals, including the removal of snipers, addition of OSCE monitors at the line of contact, and the placement of a gunfire locator system to clearly identify those breaking the ceasefire.

She noted that prior to her travels to Artsakh, she was visited several times by the Consulate of Azerbaijan, which cautioned her from traveling there due to violence, and threatened dire consequences.  Upon her return, Rep. Chu was added to the Azerbaijani Government’s notorious “blacklist” – prohibiting her from traveling to Baku – a designation that she considers a “distinctive badge of honor.”

Commenting on House passage of the Armenian Genocide Resolution (H.Res.296), Rep. Chu noted, “finally we are putting the U.S. on the right side of history and thanks to this vote, we can ensure that the world doesn’t forget.”

Congressional Armenian Caucus Co-Chair Frank Pallone (D-NJ), who is the most-traveled U.S. Representative to Artsakh, commented about his most recent trip just weeks ago. “I was amazed at how much progress the country has made in the last 10 or 20 years. […] This is a country that is not only democratic and transparent and committed to the rule of law, but economically is better every time we go.”  Rep. Pallone stated that he and his Congressional Armenian Caucus colleagues were already hard at work to implement new programs following their trip to Armenia and Artsakh.

Regarding the Armenian Genocide Resolution, Rep. Pallone thanked all the members of Congress who spoke out in support of the resolution and the Armenian American community for their decades of dedicated efforts to make that happen.

Congressional Armenian Caucus Co-Chair Jackie Speier (D-CA), quoted Winston Churchill, who famously stated, “Never, ever, ever, ever, ever give up.  We saw the most extraordinary vote – 405-11 – achieved it because of all of you. […] Thank you for never giving up hope and always keeping the faith.”

Rep. Speier described her first visit to Artsakh as “beyond wonderful” and an “exceptional experience.”  It was “wonderful to see the hopefulness, the sense of pride, that was evident everywhere,” said Rep. Speier, who went on to share her uplifting visit to The HALO Trust to review their demining efforts and pledged to help secure funding to finish the project.

Senior House Foreign Affairs Committee member Brad Sherman (D-CA) stated, “We are no longer co-conspirators of Armenian Genocide denial,” noting that “now a stain on the honor of America has been lifted.”  Rep. Sherman stated that the House should pass Armenian Genocide legislation every year to commemorate the April 24th anniversary.  The Congressman presented the Foreign Minister Mayilian with a framed copy of the Armenian Genocide Resolution, as a memento of the great victory.

Regarding Artsakh, Rep. Sherman discussed his two decades commitment to ensuring the continuation of Artsakh assistance and the recent passage of the Sherman amendment to the FY20 National Defense Authorization Act (NDAA), which would block the sale of U.S. defense articles which could be used by Azerbaijan to shoot down civilian aircraft – a threat Azerbaijani authorities made as early as 2011.

Central California Congressman TJ Cox (D-CA), who led the Cox amendment to the FY20 Foreign Aid Bill to ensure continued aid to Artsakh, noted, “I am humbled to have met the Foreign Minister of Artsakh, and look forward to the opportunity to visit the region in person someday. Also, we will continue to support demining efforts to ensure the residents of Artsakh can live safe, happy lives.”

Ambassador of Armenia to the U.S. Varuzhan Nersesyan cited the progress of the Republic of Artsakh and its commitment to peace.  “Both Armenia and Nagorno Karabakh (Artsakh) are firmly committed to the peaceful resolution of the conflict.  But I want to be clear – that conflict is supposed to be resolved on the basis of the right of the people of Nagorno Karabakh to exercise its own right – on its ancestral lands – to self-determination.  This is a fundamental right and there is no doubt that this right will be exercised and recognized by the international community.”

Foreign Minister Masis Mayilian offered the keynote address of the evening, quoting President George Washington in describing reasons for Artsakh victory.  “If we had secret resources unknown to the enemy, they consisted of the unshakable determination of our citizens, awareness in righteousness of our position, and the assurance that God will not abandon us,” noted Mayilian, who then added, “we always felt the support of compatriots, our friends, and all those for whom the ideals of freedom, equality, democracy and human rights were not meaningless.”  Mayilian went on to make the case for international recognition of the Republic, arguing that “is the most appropriate response to the threat that comes from Azerbaijan.”  He stressed that “international recognition of Artsakh will ensure the irreversibility of the peace process, and will become an incentive for a final resolution of the conflict through negotiations.”
Mayilian, who was present in the U.S. House of Representatives gallery with Ambassador Nersesyan, Artsakh Representative to the U.S. Robert Avetisyan and ANCA leaders and staff from across the United States to witness the historic Armenian Genocide Resolution (H.Res.296) vote, congratulated Congressional leaders and Armenian American community members alike for the historic victory.  “The recognition of the Armenian Genocide is extremely important for the security of Artsakh and the entire region,” said Mayilian.

In addition to the Capitol Hill celebration, Foreign Minister Mayilian was in Washington for a series of Congressional meetings and discussions with think tanks and Armenian American organizations, including the ANCA, where they reviewed the ANCA’s pro-Artsakh priorities and efforts to expand U.S.-Artsakh cooperation.  At a special Armenian Embassy Reception on October 31st, Foreign Minister Mayilian honored ANC of Michigan co-Chair Lara Nercessian with the Artsakh President’s Medal of Gratitude for her leadership in securing Michigan’s recognition of Artsakh in 2017.  Nine U.S. states have recognized the Republic of Artsakh, including California, Colorado, Georgia, Hawaii, Louisiana, Maine, Massachusetts, Michigan, and Rhode Island.