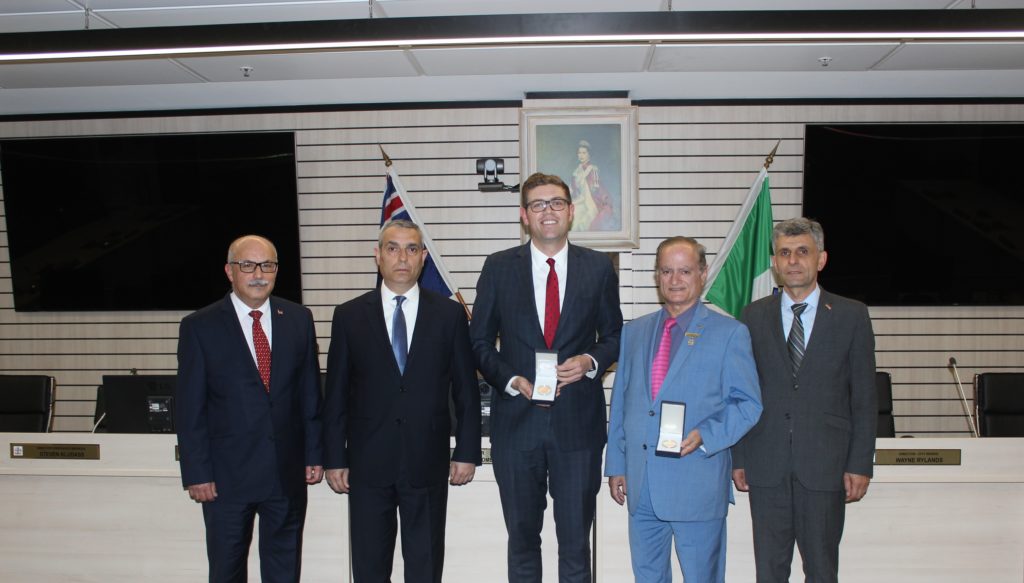 The delegation headed by Minister of Foreign Affairs of the Republic of Artsakh Masis Mayilian met with Mayor of the city of Ryde Jerome Laxale.

Masis Mayilyan stressed the importance of the unanimous adoption by the Ryde City Council of the resolution on establishing friendly relations with Stepanakert, the Artsakh capital, on the eve of the Artsakh delegation’s working visit to Australia.

According to the Foreign Minister, the adoption of such a resolution is another proof of the principled stance of the Ryde city authorities in supporting the aspiration of the people of Artsakh for free and peaceful development, which has already been expressed on May 22, 2018 resolution adopted on the 30th anniversary of the national-liberation movement of the people of Artsakh.

Touching upon the international relations of the Republic of Artsakh, Masis Mayilian noted that the establishment and development of decentralized cooperation between Artsakh and foreign cities is among the priorities of the authorities of Artsakh, which allows the communities and regions of Artsakh to be involved in international processes, aimed at strengthening the friendly relations between the peoples, exchanging experience in different areas and promoting human rights. The Foreign Minister stressed that the development of decentralized cooperation is also important against the background of Azerbaijan’s continuous efforts to isolate Artsakh and to deprive its citizens of the advantage of international cooperation.

For his part, Mayor of Ryde Jerome Laxale reaffirmed the commitment of the Reid authorities to the realization of the right of the people of Artsakh to self-determination and support in their quest to build a democratic society.

During the meeting, Masis Mayilian handed the thank-you letter of Stepanakert Mayor Suren Grigoryan to Jerome Laxale, in which the Mayor expressed his gratitude for the adoption of the resolution and invited Jerome Laxale to visit Stepanakert.

Member of Ryde City Council Sargis Yedelian, member of the National Assembly of Artsakh David Ishkhanyan, Permanent Representative of the Republic of Artsakh to Australia Kaylar Michaelyan and Executive Director of the Armenian National Committee (Hay Dat) of Australia Hayk Kayserian also participated in the meeting.