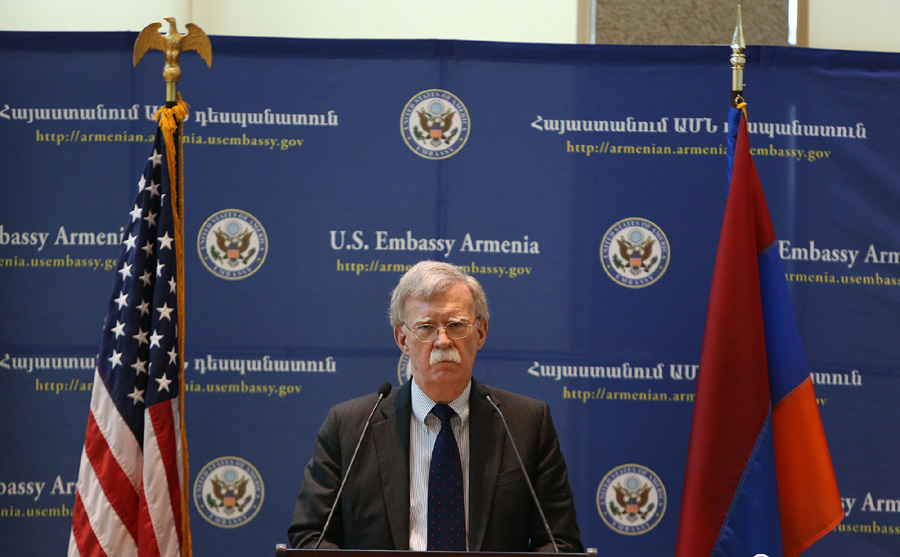 US National Security Advisor Bolton’s visit to Tbilisi, Baku and Yerevan is motivated by the complexities of US-Russia relations at this stage of the game. He is in the region to send a clear signal to Moscow that President Trump’s White House will not hesitate to reactivate its options in Russia’s “near abroad” neighborhood once again.

John Bolton is not new to the region. He has always held the neocon conviction that the US must have, AT WHATEVER COST, full strategic control of the Middle East. The problem is that things have changed and that is an unreal proposition at this point. The Iraq war — wrongfully conceived by the neocons of the G.W. Bush era — ended up strengthening Iran’s position in Iraq. And the war in Syria, rapidly internationalized by the appearance of many forces on the ground, has been a quicksand for US diplomacy. Old “friendships”, such as Israel, Turkey and Saudi Arabia, have not been terribly reliable. US policy in the region has been in poor shape and Russia and Iran have remained boldly active in Northern Syria.

Pushing Armenia to “cooperate” on the Artsakh issue, i.e. be willing to negotiate from a position of weakness ultimately agreeing to give up territory, would certainly buy President Trump substantial influence in Baku thus potentially destabilizing Russia’s hold over the South Caucasus. It would also make Iran feel real vulnerable. A huge jackpot indeed for John Bolton…(Everybody’s imagination is fired up by the “mega million” US lottery these days!)

Will Bolton be successful in carrying this “war booty” home anytime soon? Will Armenia fall to the temptation? Will Azerbaijan play knowing that Russia has been such an “addicted” party to Azeri cash? Will there be a geo-strategic shift in the Caucasus as a result of Bolton’s visit?

What do YOU think?