Searching for Genocide Survivors: A Century Ago, in the Classifieds 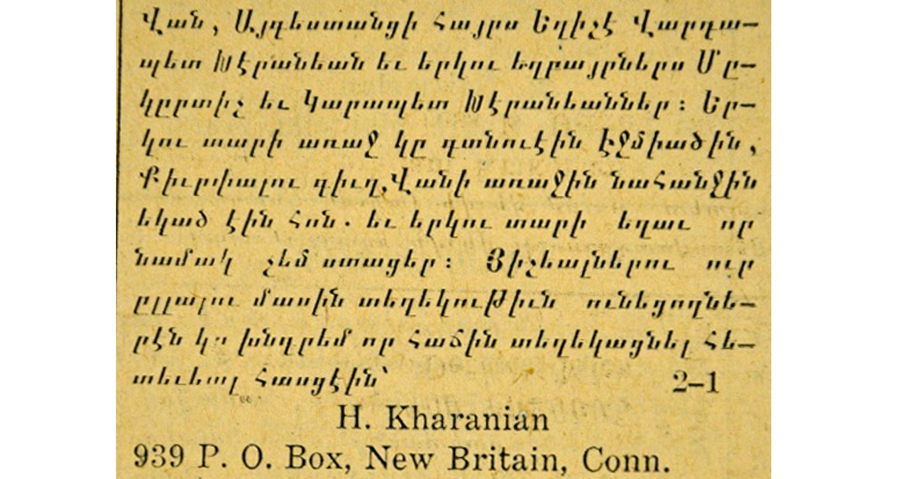 Story and Photo by Matthew Karanian

One century ago, on April 22, 1919, my grandfather placed a classified advertisement in the Hairenik, the leading Armenian language newspaper in the United States.

His message was simple, and it was direct.

I am from the Aygestan neighborhood of Van, my grandfather wrote. My father was a Vartabed (high priest) named Yeghishe Kheranyan. My brothers are Mrgdtich and Garabed Kheranyan. If you have any information about them, please write to me.

He wrote his message in Armenian, the language of the immigrants he hoped would read his plea. He printed his mailing address—a Post Office Box in New Britain, Conn. that he had opened in anticipation of a flood of replies—in English.

Grandpa’s mailbox never received any mail. No one replied to his advertisement.

My grandfather was Hovhannes Kheranyan (Karanian), and he was 24 years old when he penned this message. He had left his home in Van and had traveled to the US in 1912, shortly before the start of the Armenian Genocide. Now he was searching for any relatives who might have survived.

My grandfather’s method of searching for genocide survivors wasn’t uncommon.

In the years following both the Adana massacres of 1909 and the Armenian genocide of 1915, many of those who survived and who had taken refuge in other countries attempted to locate the lost members of their families by placing public notices in newspapers.

The Hairenik, an Armenian language newspaper that has been continuously published in the US since 1899, played a significant role in this effort in America. Armenian refugees in the US placed notices in the newspaper announcing that they had survived, and seeking to learn if anyone else in their family had, too.

The Hairenik was published daily from 1915 through 1991—it was issued weekly before 1915, and it’s a weekly once again today—and placing a public notice in this newspaper was perhaps the best way to reach a large audience of Armenians at the time.

My grandfather’s ad is one of thousands of similar ads that would eventually be printed in the aftermath of the genocide, by Armenians who were seeking to locate their families.

He, and the others, must have suspected that their families had been killed during the genocide. But still, they published the notices and they waited for news.

In 1912, seven years before this advertisement was published, my then-17 year old grandfather had left his home in Van and had traveled to New Britain, Conn. He had planned to stay in the US for a few years, earn a lot of money, and then bring it back to his family in the Old Country.

His plan was not uncommon among the young men in his hometown of Van, or in many other towns and villages on the Armenian Highland—a region that is more commonly known today as Western Armenia.

The genocide forced him to abandon his plan to return to Van, however. Many years later, he would eventually correspond with the few surviving members of his family who had escaped to Yerevan. But he never saw them again.

Hovhannes Kheranyan’s advertisement and many of the other advertisements seeking genocide survivors have been electronically preserved by the Armenian Immigration Project, which is operated by Mark B. Aslan. The project maintains a database of thousands of the missing person notices that appeared in the Hairenik during 1919 and 1920.