A two-picture collage featuring satellite photos from October 17, 2020 and February 15 was recently published on Twitter. Azerbaijan’s destruction of the domes of Saint John the Baptist Church, commonly known as Kanach Zham, was first reported on in November 2020, days after the city came under Azeri control.

A photo of an Azerbaijani soldier that was shared online in late 2020 featured the church standing in the background, whereas another photo from around the same period shows that the domes are gone. 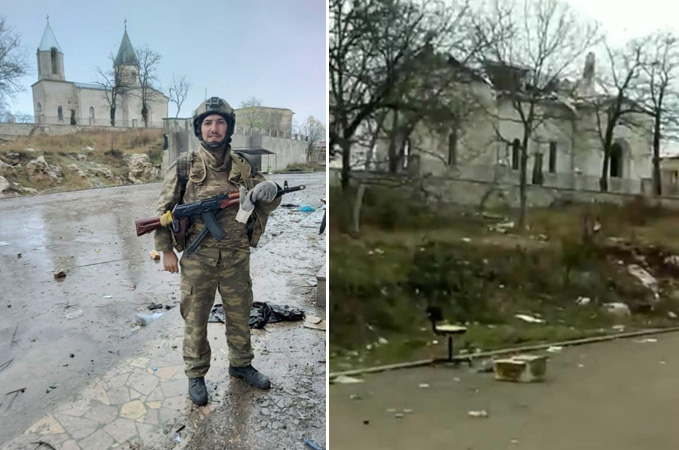 Video and photo evidence of Azerbaijan’s vandalism against the Ghazanchetsots Cathedral of Shushi, the St. Astvatsatsin Church of Mekhakavan and other Armenian cultural sites has been published too.

During the recent military hostilities, Azerbaijani forces launched two targeted attacks on the Holy Savior Ghazanchetsots Cathedral in Shushi. Azerbaijan earlier “restored” a church by replacing its Armenian inscription with glass art. Furthermore, Azeri President Ilham Aliyev visited the region of Hadrut in territories occupied by Azerbaijan and declared his intention to “renovate” a 12th century Armenian church, which he described as “an Albanian church”. Aliyev went as far as to accuse Armenians of leaving “fake inscriptions” in the Armenian language.