ANCC Thanks Canada for Allocating $260,000 For COVID-19 Assistance to Armenia 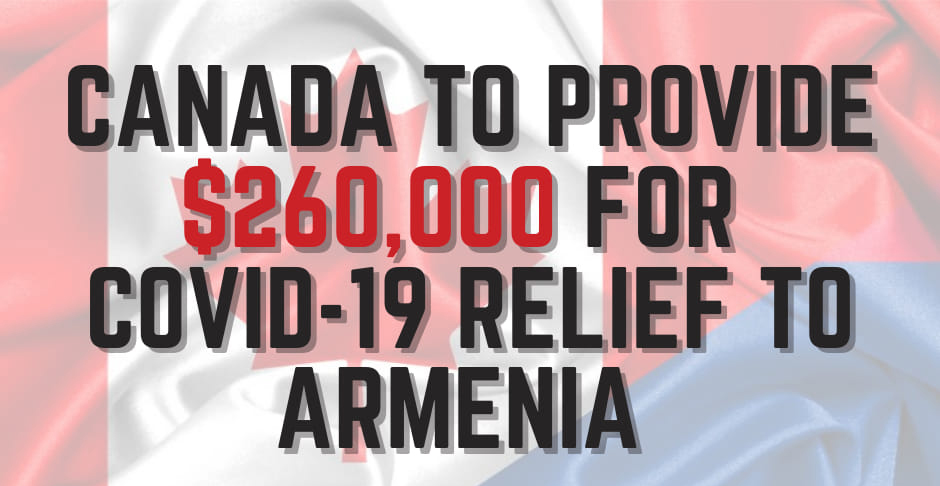 This funding package comes at a time when a worrying rise in infections over the past few weeks has seen Armenia’s case total reach nearly 43,000, placing significant pressure on the government’s response plan.

“Since the onset of the global pandemic, we have been on the frontlines advocating for international aid and relief to help alleviate the mounting pressure on Armenia’s economy and health care system and ensure the safety and well-being of its citizens.”, said Hrag Darakdjian, Co-President of the ANCC.

After learning about the official request for aid made by the Armenian Embassy in Ottawa, the ANCC immediately reached out to Global Affairs Canada, asking the government to allocate funds to help Armenia battle the novel coronavirus.

“Discussions were held with Minister Ng and other elected officials where we shared with them the situation on the ground and the urgency for immediate help and we are grateful that our government recognized the severity of the situation and decided to help Armenia” said Shahen Mirakian, Co-president of the ANCC.

The funding that will be distributed soon will be channelled to the Armenian Red Cross, via the Canadian Red Cross and will help Armenia fight the pandemic based on its needs and capacities.

Stronger bilateral relations between Canada and Armenia – a top priority for the ANCC – has significantly advanced in recent years, especially after Prime Minister Justin Trudeau’s historic visit to Armenia in October 2018.

Canada’s presence in Armenia has significantly increased through more robust diplomatic and economic relations and various programs such as the Arnold Chan Initiative for Democracy in Armenia, the Canada Fund for Local Initiatives and now this aid package that comes at a time of urgent need.

“As bilateral relations grow stronger and deeper, we will continue to strongly advocate for the establishment of a permanent Canadian diplomatic representation in Yerevan that will substantially increase the level of bilateral engagement, facilitate more trade and ease the process for Canada’s aid programs in the Armenia”, concluded Darakdjian and Mirakian.

The ANCC thanks the Canadian government, Ministers Champagne, Ng and Gould and our elected officials for their efforts on this important matter and we remain committed to helping Armenia as it safely makes its way out of this global crisis.