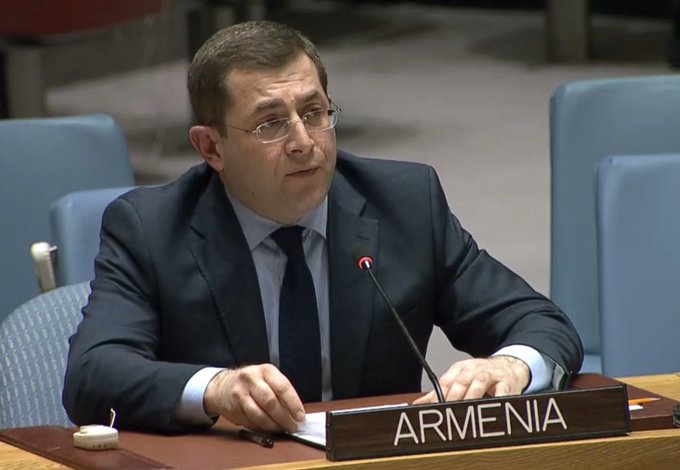 Armradio – Armenia remains firmly committed to the global fight against terrorism and is actively engaged in international and regional activities aimed at the implementation of the counter-terrorism conventions and their additional protocols, as well as the relevant resolutions adopted by the UN Security Council, Armenia’s Permanent Representative to the UN Mher Margaryan said at the UN Security Council VTC Meeting on “20th Anniversary of Resolution 1373 (2001) and the Establishment of the Counter-Terrorism Committee: Trends, challenges and opportunities.”

He stressed that mobilization of foreign terrorist fighters in conflicts represents a new alarming trend.

“Our region is not immune to the scourge of terrorism and its radical ideology and violent practices. Amidst the outbreak of an unprecedented global pandemic, on 27 September 2020 Azerbaijan, with the direct support of Turkey, employed thousands of foreign terrorists fighters in a large-scale military aggression against Nagorno-Karabakh (Artsakh),” Armrnia’s envoy to the UN said.

“The offensive led to massive loss of human life, displacement of tens of thousands of civilians, destruction and desecration of religious and cultural heritage and other gross violations of international human rights law and humanitarian law. The ISIL-style torture, inhuman treatment and executions of prisoners of war and civilian hostages by the Azerbaijani forces was widely disseminated and glorified in the media outlets and social networks,” he added.

Mr. Margaryan noted that “he recruitment of foreign terrorist fighters by Turkey from the Middle East and their transfer to Azerbaijan and the Nagorno-Karabakh conflict zone is a well-established and documented fact, acknowledged by law enforcement agencies of several countries and extensively reported by independent observers.

“The UN Working Group on the use of mercenaries of the United Nations Human Rights Office of the High Commissioner in its Statement of 11 November 2020 has referred to “widespread reports that the Government of Azerbaijan, with Turkey’s assistance, relied on Syrian fighters to shore-up and sustain its military operations in the Nagorno-Karabakh conflict zone, including on the frontline. The fighters appeared to be motivated primarily by private gain, given the dire economic situation in the Syrian Arab Republic. In case of death, their relatives were reportedly promised financial compensation and Turkish nationality,” the Ambassador stated.

“It is even more disturbing that the Syrian fighters deployed to Azerbaijan are allegedly affiliated with armed groups and individuals that, in some cases, have been accused of war crimes and serious human rights abuses during the conflict in Syria, thus seemingly perpetuating a cycle of impunity and risking further abuses of international law,” Mher Margaryan stated.