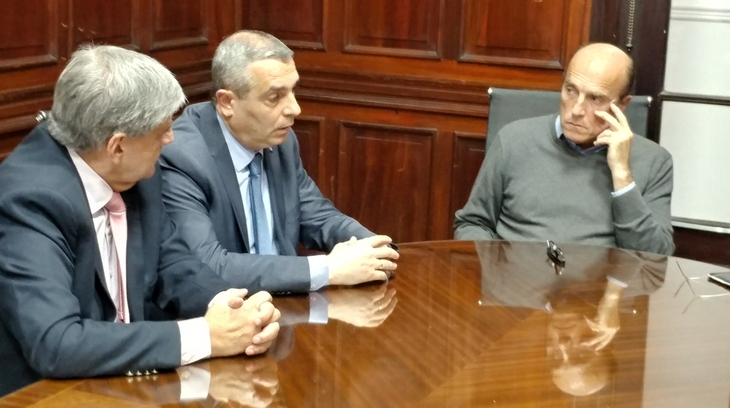 Within the framework of the working visit to Uruguay, the delegation of the Republic of Artsakh headed by Minister of Foreign Affairs Masis Mayilian met with the candidates of the autumn 2019 presidential elections in Uruguay representing the ruling and leading opposition political forces.

During the meeting with Senator Dr. Luis Lacalle Pou held in the Parliament, the Foreign Minister briefed on the achievements in the state-building process in Artsakh. The sides discussed the prospects of establishment and strengthening of inter-parliamentary ties between Artsakh and Uruguay, as well as cooperation in the humanitarian and other spheres.

At the request of former Mayor of Montevideo Daniel Martinez, Masis Mayilian briefed on the priorities of the foreign policy of Artsakh, in particular, the processes of international recognition of the Republic of Artsakh and the peaceful settlement of the Azerbaijan-Karabakh conflict.

During the meeting with former Minister of Industry, Energy and Natural Resources of Uruguay Caroline Cosse, along with other issues, the sides exchanged views on the possibilities of raising the awareness of Artsakh in Uruguay. The meeting took place in the Central Office of the ‘Wide Front’ ruling coalition.

The participants of the meeting stressed the importance of maintaining contacts, regardless of the outcome of the forthcoming presidential elections in Uruguay.