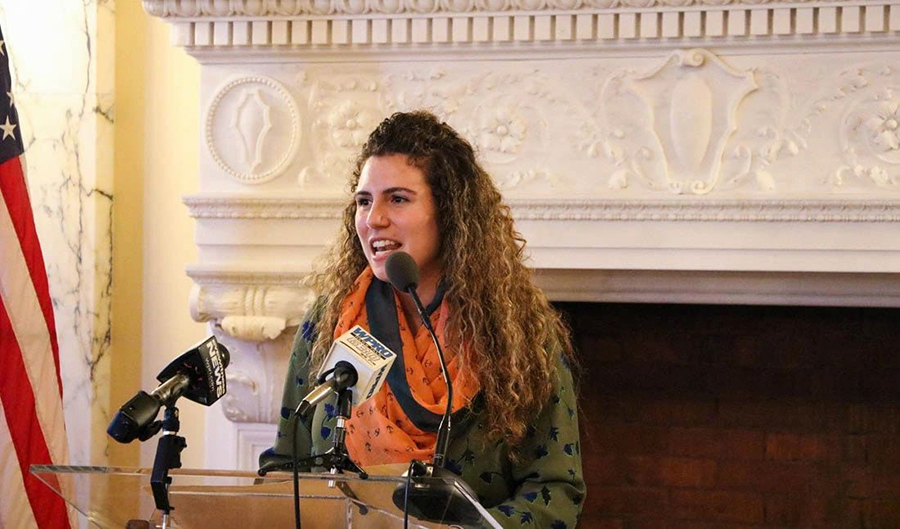 Kazarian “has sponsored numerous bills to expand the scope of health insurance coverage for Rhode Islanders, including a law that requires health insurance plans to provide for a 12-month supply of birth control to all those who are insured. She has also sponsored legislation to reduce the burden of student loans and successfully created a process for the Department of Education to collect and organize information concerning the duties and responsibilities performed by school social workers.”

Kazarian grew up in East Providence. A graduate of Columbia University, she majored in Urban Studies and Economics. She was elected as a member of the House of Representatives for District 63 in September 2012. She has a strong background in the tech field, having previously worked at both Upserve and Virgin Pulse, and was previously a Senior Planner for the City of Pawtucket.

Engaged to Sam Daniel, she will be attending law school in the fall.

As a fourth-generation Armenian-American, Rep. Kazarian has prioritized the recognition of the Armenian Genocide every year that she has been in office. In 2014, she introduced a House resolution that “set aside April 24, 2014 as day to remember the victims of the atrocities that took place against Armenians, [and] to serve as a reminder that the world must not allow history to repeat itself.” The following year, Rep. Kazarian joined the House of Representatives and the Senate in honoring the centennial of the Armenian Genocide and introducing resolution 2015-H 6053, urging President Obama and Congress to officially recognize the Genocide. She has also participated in the Armenian National Committee of Rhode Island’s (ANC-RI) flag raising ceremonies to commemorate the Armenian Genocide.