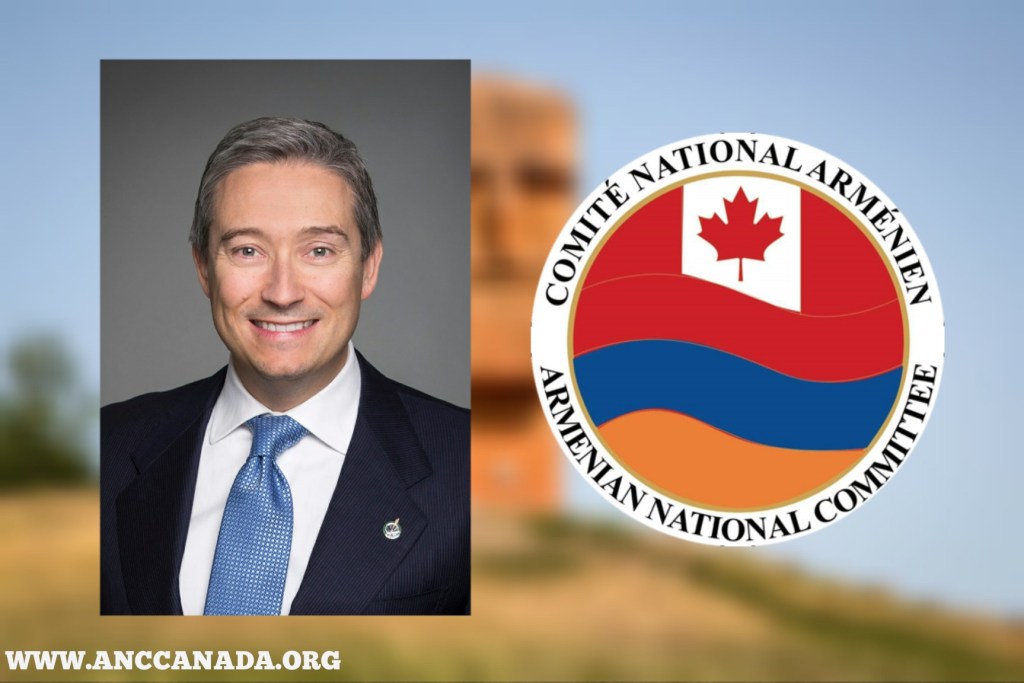 (OTTAWA – December 2, 2020) On December 2, 2020, the Armenian National Committee of Canada (ANCC) issued a letter to Canada’s Minister of Foreign Affairs, the Hon. Francois-Philippe Champagne, regarding the war crimes that continue to be committed by Turkey and Azerbaijan, the status of nearly 100,000 displaced Armenians and the plight of Armenian Prisoners of War (POW) whose fate remains uncertain.

The so-called ceasefire that was announced on November 9, 2020, by Russia, Armenia and Azerbaijan achieved very little and left many issues unresolved, namely the status of Armenian POWs and personnel that are missing in action.

The letter, signed by ANCC Co-Presidents, Hrag Darakdjian and Shahen Mirakian said “While a final status for the Republic of Artsakh remains uncertain, a large number of Armenian Prisoners of War (POW) are under Azerbaijani custody and nearly 100,000 Armenians are displaced, without any mechanisms in place to ensure their safe return. International organizations such as the International Committee of the Red Cross have been tasked to facilitate the return of POW’s and search for all personnel who have been missing in action, however, due to the malicious unwillingness of the Azerbaijani government to cooperate, they have not had much success.”

The letter also addressed the war crimes committed by Turkey and Azerbaijan, that are unfortunately continuing to this day, as Azerbaijani forces are gradually occupying the Armenian territories.

“Aside from using internationally banned cluster munitions and chemical weapons, the Azerbaijani-Turkish forces bombed schools and hospitals, tortured and mutilated innocent civilians and desecrated cultural and religious sites that represented the wealth of Armenian heritage in Artsakh.” read a part of the letter.

The letter urged the Canadian Government to condemn the ongoing war crimes, work with international organizations to ensure the safe return of POWs and apply the necessary pressure on Ankara and Baku to cooperate in this regard.

“While the international community failed to contain Turkey and Azerbaijan as they unleashed their unprovoked aggression against Armenia and Artsakh, denouncing their war crimes and ensuring the safe return of POWs and missing personnel is the least that must be done to provide a sense of closure to the over 100,000 people who have now been displaced and the countless others who have lost their loved ones due to Turkish-Azerbajani aggression.”, concluded the letter.