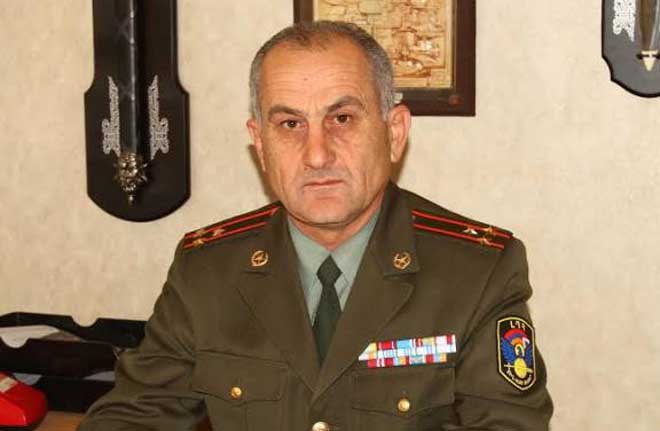 ARMENPRESS/ARTSAKHPRESS.  Azerbaijani Major-General Hikmet Hasanov gave an extensive interview to armiya.az website recently, presenting the April war of 2016 as an impressive victory of the Azerbaijani army. The high level military official, who spared no wonderful words to describe his army, also “condemned” the actions of the Armenian army, noting that starting from 2015 the Armenian side kept bordering Azerbaijani settlements under fire, carrying out sabotage attempts at the same time.

ARMENPRESS presents the remarks and responds of press secretary of the Defense Ministry of Artsakh, Colonel Senor Harutyunyan.

Referring to the border situation prior to the April war, Senor Harutyunyan noted that starting from the second half of 2014 the Azerbaijani side regularly increased the number of ceasefire violations, using more and more serious weapons. “It went even farther on November 12, 2014, downing the Mi-24 helicopter conducting a training flight with no ammunitions, which was the most massive ceasefire violation since 1994. Afterwards, ignoring all the international humanitarian norms, denied to return to the Armenian side the bodies of the staff lying in the neutral zone”, the Colonel said, adding that it was possible to return the bodies thank to the excellent operation conducted by the Armenian side. “Day by day  escalating the situation, the Azerbaijani side conducted  a military adventure in April”, Harutyunyan said, underlining that the Armenian side has never targeted Azerbaijani civilians, but the Azerbaijani troops often use their population as human shields by stationing its positions inside settlements and firing from there. “In such cases those positions must be immediately eliminated. Here as a proof I will mention only the case of silencing the fire positions of Azerbaijan stationed in Çəmənli and Zangishal settlements, after which clashes between the local residents and the servicemen took place. It’s impossible to find better evidences”, he said.

Referring to the remark of the Azerbaijani General who said that once their defense minister had ordered to plan and implement a more decisive strike against Armenians putting end to all the problematic issues, the press secretary of the Defense Ministry of Artsakh said, “These words of the Azerbaijani General prove that active preparations for carrying out a large-scale offensive had been implemented before April 2016”.

Speaking about the Azerbaijani claims about their “huge achievements” during the April war, Senor Harutyunyan said, “Using almost its entire arsenal, including helicopters, SMERCH multiple rocket launcher, TOS-1 heavy flamethrower system, UAVs, SPIKE guided anti-tank missiles, different types of artillery and rocket launchers, and suffering numerous human losses, the Azerbaijani army implemented a military task equivalent to a battalion. If this is the criteria for the combat readiness of the Azerbaijani army, they can enjoy their “brilliant” victory and continue to enjoy its consequences”.

Referring to the announcement of Hikmet Hasanov that Azerbaijan did not use its reserve forces during the April war, otherwise the Armenians would be fully demolished, Senor Harutyunyan noted that the Azerbaijani General is either unaware of the reality or just deceives. “During the first day of the military operations in April, following the losses inflicted on the army, the Azerbaijani command staff was forced to move its reserve units to the frontline, particularly, to the section of Akna, where huge damage had been inflicted on the 190th motor-rifle brigade most of the units of which had been demolished and the commander of the brigade, Colonel Yusubov was killed. For that reason the 130th and 708th reserve brigades of Azerbaijan stationed in Ganja and Mingachevir moved in the direction of Akna. Folowing the destruction of these reserve forces, as well as the special unit “Yashma”, Azerbaijan was seeking ways to stop the military operations, and finally managed to reach its goal through the brokering of Moscow, once again beseeching a ceasefire that it needed so much”, Harutyunyan said, conclusing with a rhetoric question, “If no reserve forces were used, how did the SMERCH or TOS systems, helicopters and UAVs appeare in the frontline?”.