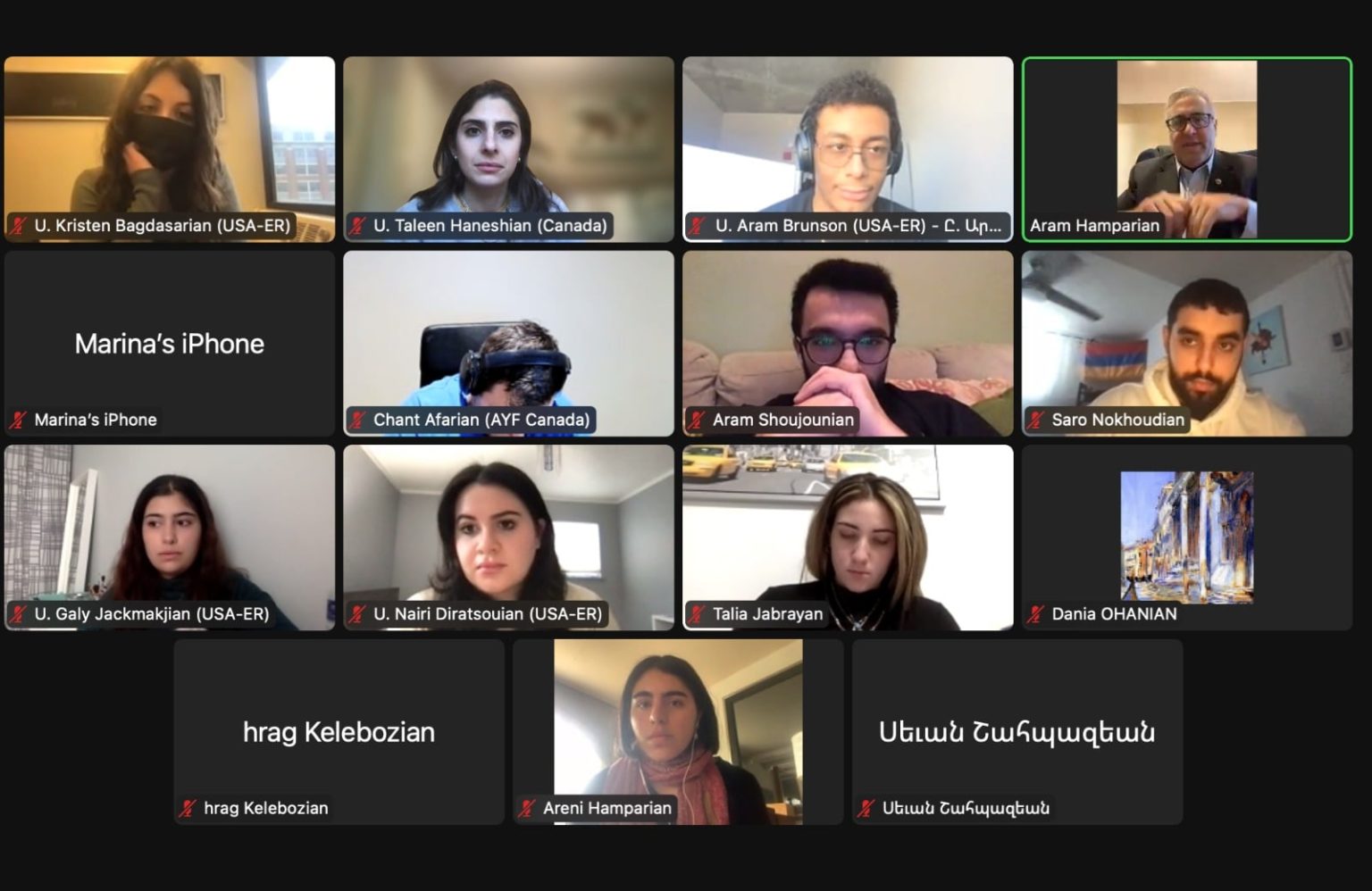 This week, the Armenian Revolutionary Federation (ARF) Bureau Youth Office hosted a two day virtual leadership seminar. About a dozen ARF youth from the eastern and western regions of the US and Canada came together to discuss, learn and grow in the guided wisdom of respected ARF community leaders from around the world. We were all fortunate to have the opportunity to proudly represent the AYF-YOARF Eastern United States.

The leadership seminar opened with the always inspirational words of ARF Bureau member Aram Kaloustian followed by a series of discussions on the following topics:

Der Ghougassian’s lecture challenged us to expand our thinking about socialism. Der Ghougassian frequently asked for input from participants, forcing us to mull over important questions like “in what ways is the ARF socialist?” or “what policies do you think the ARF would implement in government?” Der Ghougassian pushed us to go deeper and get to the heart of the issue, beyond ideas like the ARF’s socialist roots simply because we call each other unger.

There is an Armenian phrase, “Glorve khoup, gde poulik” (“The lid rolls, finds a pot”), referring to two things that are perfect for each other. The Tashnagtsoutioun is that pot and socialism is its lid; the two are inextricably linked in a manner that goes far beyond merely select passages from the Dzrakir. The ARF’s particular style of socialism, its commitment to political, social and economic equality, is an inseparable part of this 13-decade old organization. This, in particular, was clear after Der Ghougassian’s lecture, at the end of which he asked participants to think of one way in which they could effectuate socialist change in our communities through three of the facets of the ARF’s style of socialism: gender rights and equality, environmental justice and just redistribution of wealth and income.

Unfortunately, this sort of deep reflection on the ideology of the ARF is missed by many members of the Armenian Youth Federation (AYF). In countless cases, exposure to socialism consists of surface-level exploration of the ARF program or singing of the anthem of the ARF, Mshag, Panvor. “These important discussions were the highlight of the seminar, as we do not normally delve deep enough into the ideology of the ARF,” reflected Aram Brunson of the AYF Greater Boston “Nejdeh” Chapter. “But as the future generation of the Tashnagtsoutioun, these are the sorts of conversations and discussions that must occur at every level of the AYF-YOARF.”

Though Der Ghougassian specifically spoke about socialism, what was particularly poignant was the idea of truly interacting with all of the ideals of the ARF. As Simon Zavarian once said, “Words are dead without action.” Such is the nature of the ARF, which has spent far more time implementing its fundamental ideals than talking about them. The Tashnagtsagan represents this at a core level; it is not enough to know and believe in our ideals or even to simply hope for their adoption as policy under the rule of a future Tashnagtsagan government. We, as Tashnags, must live and breathe our ideology and work toward its practical application, no matter where we are.

In our third lecture-based discussion of the day, Mher Karakashian reiterated the term underpinning why over a dozen ungers spent their weekend in attendance: hairenasiroutioun. To be hayrenaser is testament to our survival. To be hayrenaser as a people under constant threat of annihilation is at the essence of the Armenian identity; our strong history is a culmination of actors attempting to challenge this will of the Armenian people, and time and time again, the Tashnagtsoutioun takes this devotion to our nation and puts it into action.

we are born advocating for justice

The Armenian identity itself is a political one; we are born advocating for justice. What we recognize as the permanent struggle is part and parcel of both our history and present. We must be in constant conversation about the current state and future of Armenian politics, whether in the homeland or in our respective diasporas.

With diaspora odarootioun, our center of gravity proves to be our getrons and agoumps. Throughout these communities, it is the responsibility of our Armenian and ARF youth, now more than ever, to ask: how can I contribute to the askayin kaghakagan kordz? This is where the essence of the Armenian identity merges: to be hayrenaser and utilize politics as an avenue to serve our nation. Every Armenian, no matter their profession, must strive to immerse themselves in Armenian politics, for it will elevate the Armenian Cause in our diasporas.

Within an already existing Armenian political arena, it is our responsibility to take advantage of this potential as the present and future of our nation to become politicized and realize what we risk if this call to action is ignored. It is the desire of both Turkey and Azerbaijan to stifle Armenian political action, which alone demonstrates the need to vitalize this conviction.

Karakashian implored the ARF youth in attendance to always apply the heghapokhagan mindset in their political endeavors, to approach everything with a critical and analytical lens, to ask ourselves, “What is the stamp that the ARF youth will leave?” There is a central theme to the character traits necessary to leave that stamp: Bargeshd, Artar, Midke Layn, Sirde Pats, Kach, Oojegh and Chvakhtsogh. These traits, paired with the persistent nature of a Tashnagtsagan, are the backbone of our steadfast permanent struggle.

By embodying the mindset of serving the homeland, the ARF youth are able to inspire by way of antsnagan orinag. And by serving by example, the hope remains that the wider community of Armenian youth will become kaghakaganatsadz. “In reflecting on U. Mher’s inspirational words, my immediate reaction was to think of Armenian advocacy. My advice to Armenian youth answering the call to action, start with the ANC,” noted Nairi Diratsouian of the AYF New Jersey “Arsen” Chapter.

Aram Hamparian spoke on the current situation in Artsakh and ARF political strategy. He powerfully summarized the role of the ARF as an organization that will not bend to the will of any other entity, be it factions of American politics or international alliances such as NATO. His words prompted the ungers to reflect on how, despite constant marginalization, the ARF has always remained firm and loyal to the Armenian nation. He reminded us that as Tashnags, we proudly inconvenience those who seek to destroy Armenia. These words and ideas left the ungers with a feeling of pride knowing that whatever the future holds, the ARF spirit will never be broken.

Hovsep Der Kevorkian concluded the virtual event with encouraging remarks, reminding ARF youth that planning is the key, but it means nothing if one does not follow up on the plans.

At the end of the seminar, the ungers were given the opportunity to discuss constructive criticism. An overall consensus? The seminar was too short. “We need to have more of these worldwide fundamental and leadership seminars, more fruitful discussions, in order to continue to build the strongest ideological foundation for our future generations to come,” reflected Galy Jackmakjian of the AYF DC “Ani” Chapter.

Overall, the participants felt that their desires for abundant discussions around ARF Kaghapar were satiated by the imperative nature of this seminar; however, they yearn for more because seminars like this throw a flammable kindling into the already roaring fires of our passionate ARF youth.